Today is the first day of summer break. What 14 year old boy doesn’t want to be awakened at 8:00 and told, “Come on, Wimma. We are walking (2 miles) to Seaside and you are going with us!?!” I know one that doesn’t…but he went anyway! The idyllic town of Seaside has always been a favorite of mine. I’ve loved it ever since I first set foot there back in high school.  No matter how many times I visit, I never tire of the picturesque houses, gorgeous streets, unique shops, and delicious restaurants.  The temperature this morning was in the mid-70’s, so rare for a late May morning in Florida.  I loaded the little ones in the stroller, twisted the arm of the biggest boy, and we were on our way! The new pedestrian/bike bridges over Western Lake are so nice! The boys especially like pressing the button to warn cars that we are crossing 30A!

Our first stop in Seaside was Natchez Park. I didn’t know this tranquil spot existed until right after we moved down here in August.  It’s tucked into a back corner and is so quiet and there is also SHADE!!!  My favorite part of the park is the giant sundial.

The boys love climbing on the ziggurat and playing King of the Triangle!

We often bring dump trucks and sand toys and they will sit and play for as long as I let them. We decided to load back up into the stroller and head over to the grassy area in front of the Chapel.

After running and playing and moving lots of gravel, we walked on over to the playground/park. We held Henry’s birthday party there back in December.  There is a play structure, a basketball court, a tether ball area, swings, and monkey bars.  It’s also SHADED!!!  It’s adjacent to two of the pools, croquet lawn, volleyball area, and tennis courts.  There’s pretty much something for everyone there! 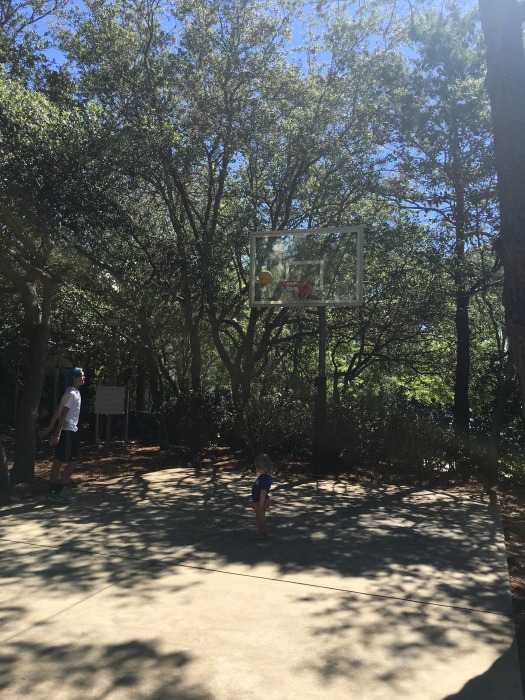 After playing for a while, we decided to stop by the Raw and Juicy Airstream for a Valencia Orange and a Pina Verde.  Their juices are freshly squeezed and will always hit the spot when you need to be replenished.  The Health Insurance shot has helped prevent a full blown sinus infection on more than one occasion for me! It’s highly recommended!

Massey enjoyed his juice from the comfort of his stroller because he fell and skinned his knee on the way to the Seaside Square. Poor fellow falls and skins his knee every few days.  Those little legs want to run a little faster than that little body can go.

Stay tuned for more Proctor Family Outings now that school is out and we aren’t tied down by nap times and school pick up times!

One Reply to “Adventures in Seaside”